Fall has arrived in Seattle, and I have been throwing it a welcome party for the past couple of weeks. Party games included freezing tomatoes, clearing out patches of garden to make room for winter crops, making corn salsa and taking a trip to our local state fair.

The party also has had lots of good food served at it, including the macaroni and cheese I made tonight (with a few revisions because I very seldom follow a recipe by the letter unless it’s for cookbook club), lots of different soups, and our perennial favorite, tacos with the above mentioned corn salsa. But so far the gem has been what I made last night: Pumpkin soup.


It’s been busy as usual around here. The boys started school, as well as Hebrew lessons with a new amazing tutor. It was Joe and my 2nd anniversary earlier this month, and now we are planning and prepping for Lilli’s 1st birthday next week.


In addition to this, last week Lilli came down with some sort of nasty virus. When I say nasty, I mean it. One minute she was fine, and literally the next minute she was crying inconsolably and I had no idea what to do. We’ve been very lucky in that she’s been pretty much 100% healthy her whole first year.


After some of her symptoms set off alarms bells in my head, I decided to take her to the Dr. that afternoon, and they performed some tests, all of which were very stressful and all of which came back totally inconclusive. It was terrifying. I was worried she was having an asthma attack, which is something I occasionally suffer from, so I’m glad I took her, but it’s frustrating to be able to do so little.

She’s fine now, but after doing another triathlon this past Sunday I came down with what is presumably the same virus. Now I know how she felt, and it feels awful.


This is where the soup comes in.

Thankfully, my appetite is intact, but Joe isn’t much of a cook so I have still been in charge of meals. And, I wanted comfort food, which to me is soup. I can’t find the kosher version of my favorite chicken soup anymore, and I didn’t really want something out of a can. So I came up with this soup. It was super quick and easy, and I even got a little bit of inspiration from another non-cook friend who happened to mention over the phone that she had a delicious pumpkin curry recently. (Yes, people still talk on the phone.)


It won’t take you long to prepare and you could make any number of substitutions. Any squash would work, as well as any sort of milk or cream. Coconut would have been excellent but I was out. You could add any vegetables you want, perhaps some kale or chard. Just be sure and eat it with warm, crusty, buttered bread. 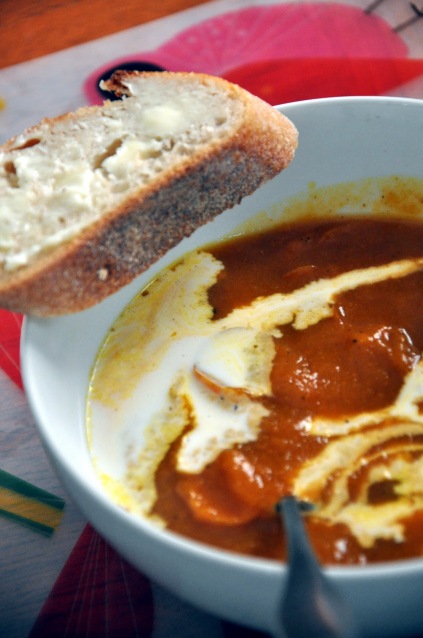 
Heat a medium sized pot, and add the olive oil. Toss in the carrots and garlic and let soften for a minute or two. Add turmeric and stir to coat all the carrots. Continue stirring until the turmeric is fragrant, then add just enough vegetable stock to cover the carrots. Cover the pot just until the stock comes to a boil, then stir in the pumpkin puree. Add stock until it is a touch thinner than a consistency that you like, then taste for salt and pepper. Add some nutmeg and bring to a boil. Let boil with the lid off for a couple of minutes, to allow the flavors to concentrate and for the soup to thicken up that extra little bit. Turn off the heat and taste again for seasoning. Serve with the cream on the side so that each person can decide how much to add.