She is my little lady. She’s quite a character already at just a year. Walking, babbling all the time, playing the silliest games she can make up, and forever curious and loving.

All of those things came true, and so much more. She brought peace to her brothers, who now have a built in friend besides each other. She brought more mirth into our home, our garden and even our trips to the store.
As Joe said when I asked him what else she brought to us this year, “She taught us the meaning of cute.” That does not even begin to describe her. She’s strong, willful, independent and a total cuddle monster at the same time. She’s a papa’s girl but she loves her mama to pieces too. She loves to play with her brothers. She shares cheese with the cat, and is always glad to see an airplane or a garbage truck. She’s a water baby and she never wants to wear socks. There is so much to this little package, I could gush forever. But who wants to read a blog post just about how awesome someone else’s baby is? Well, I can think of a few people, but really, this post is about the party.

I wanted to throw a party that would be fun and would be us. I love to entertain, and I get a lot of joy when I am able to treat the people I love to pleasant surprises. I tried to give myself permission to buy pre-made snacks, but the closest I got was using store bought puff pastry for cheese twists. I tried to make it be just our family and closest friends, but Lilli has made so many friends this year!

Lilli surprised me by being the life of the party, but not in the usual 1st birthday way of having a meltdown or being clingy. She was a 100% charming hostess, and she even shared all her new toys.  She also didn’t make too much of a mess with the cake, I’m guessing because even at such a young age, she knows not to waste a good thing… 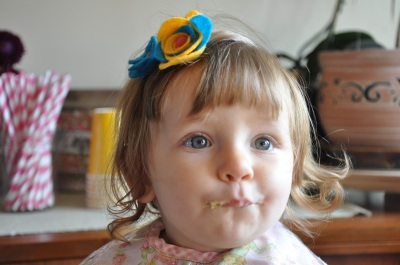 I did keep it as simple as I could. Some spiced nuts, a few types of crackers, a couple of dips and fresh veggies. A fruit salad. Some dolled up tomatoes from the garden. Pretty simple fare.

And only 2 (ok technically 3) desserts! I did a few craft projects to doll up the house, which I cleaned in a general sense but prompted my mom to say “I’ve never seen it so clean!” (Not true.) 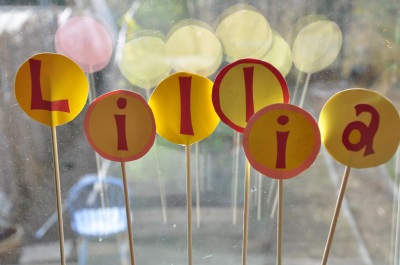 But what it really boils down to in a good party is that every one who attends leaves feeling like they did the best thing they could do that afternoon. That it was worth is to go and see the friends they saw, eat the treats they ate, and celebrate whatever it is they celebrated. I know that Lilli’s party was all of those things and I could not ask for more. We celebrated a year on this Earth made better by Lilli’s presence.


Take the puff pastry out of the freezer about 1/2 hour before you are ready to roll out the snacks.


When the dough is pliable but not sticky soft, preheat the oven to 350ºF. On a lightly floured surface, roll the dough until it is a rectangle that’s as close to 15″ as you can get it, and just wider than when it started. Distribute the cheese evenly over half, and fold the naked half over. Roll again just to seal it all up and press the cheese into the dough. Using a chef’s knife or a pizza cutter, cut strips about 1/2″ wide. They don’t have to be perfect. Take each stip and place on a parchment paper lined sheet pan, twisting a couple of times and sort of pressing the ends down as you place it on the pan. After you have all of the pieces on done, sprinkle liberally with bacon salt. I used peppered flavor. It won’t look like much is sticking, but that is OK. Once the salt heats up it kind of melts into the spreading dough.


After about 20 minutes in the oven, turn over each piece individually, kind of rubbing it in the salt that is on the pan. They should be starting to look brown and the cheese will be getting melty. Let them bake about another 10 minutes or so, until they look nice and brown all over.


You might want to use both sheets of dough that are in the package for this, because it will probably be hard to wait for the party to start before eating them. Fair warning.