Recently I decided that my plate wasn’t quite full enough and that I should take up a new hobby. One that people get obsessive over and do for ever and ever and love.

Yeah, I know. It’s kinda cliche and all that, but honestly, I have this little cutie who totally deserves to have all kinds of awesome things knitted for her, but not too many people to knit them but me. Things like this. Or this totally awesome berry pie hat, which by coincidence was just gifted to Lilli the same day as knitting club, a late birthday present from our friend Meghan.

The knitting club I joined is pretty low pressure if you can ignore the fact that we usually refer to it as a cult. It’s with people I was already well acquainted with, so I knew I would fit right in and be comfortable getting help. So far I’ve been to just 2 meetings, but there’s only been 3 since this group even started, so I’m off to a good start with the socializing part. The knitting part is going to take some time. At this Wednesday’s circle I discovered that I was actually knitting totally wrong but somehow came out with the right result. What can I say? I’ve got skills.

Last week there was some delicious white chocolate covered popcorn with cranberries that I ate way too much of. Especially considering that I was eating caramel corn every day. And the fact that it was covered in sticky melty white chocolate. Not exactly the best thing to have coating your fingers when you are trying to use them to hold onto yarn and knitting needles, but that did not stop me from eating too much anyway. There was also some ginger cookies made by the friend who started the group, and they too were addicting.

It’s a good thing I finally started that sit-up challenge this week, because I have been eating too much.

Anyhow, for this weeks meeting I decided that I should make a treat, since that’s what I do best. To get into the spirit of the season (most everybody else’s season, that is) I made delicious brownies. With, you guessed it, candy canes.

Normally my go to brownie recipe is the one from the cookbook put together by the founders of Chocolate Bar in New York, but I wanted to make a double batch and that would have required more eggs than I was willing to spare (eggs are in short supply around here lately, as most of the chickens are molting so they aren’t laying much).

I did a little searching and ended up basing them off of a recipe from the book Bittersweet instead. They are pretty much the perfect brownie, even without the addition of candy canes. If you like your brownies fudgy but not too moist or sticky, these ones are right on target, with an ever so slightly crackly crust and the right amount of chew. 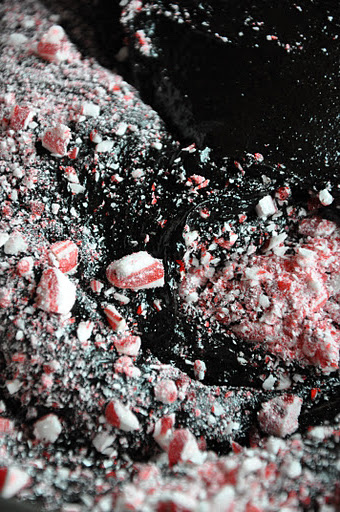 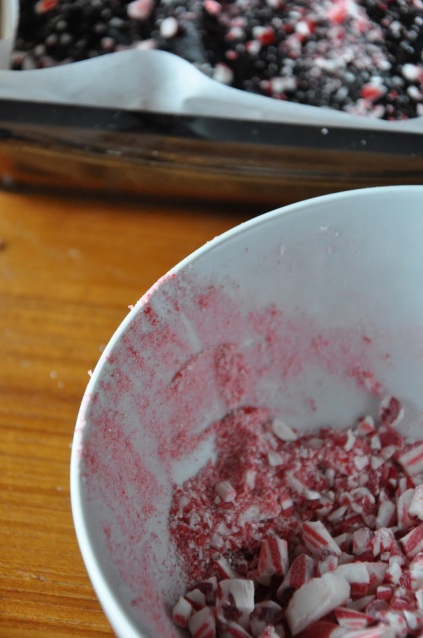 I made them with Hershey’s Special Dark Cocoa which I purchased out of curiosity. It’s responsible for the deep rich black color of the brownies, which I absolutely love. Somehow it just makes them taste better knowing that they look like a galaxy of candy cane stars.

In the end, I had to pull apart my scarf about 3 times over the course of the evening. One time for each brownie I ate. Oh well, at least I’m good at baking. 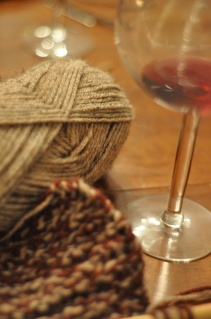 Preheat oven to 325ºF, with a rack in the lower third of the oven. Line an 8″ square baking pan with parchment paper, letting it overhang on 2 opposite edges.

In a saucepan over medium heat, melt the butter without browning. Remove from the heat and add the sugar and salt and stir until well combined. Add the cocoa powder and vanilla and combine till it forms a thick paste. Add the eggs one at a time, and beat with a wooden spoon or a spatula after each addition. Add the flour and stir until you don’t see any streaks of flour, then beat for an additional 40 strokes. About 20 strokes in add the crushed candy canes, and finish combining.

Spread batter in pan. Sprinkle on some more candy canes, as many as you like. Don’t go too heavy–you want there to be a balance of chocolate and peppermint. Bake about 20-25 minutes, until a toothpick inserted in the center comes out with some batter stuck to it, but not totally glopped on.

Cool completely on a wire rack. Use the edges of the parchment paper to remove from the pan. Cut with a sharp knife, wiping clean on a damp rag before eat cut.