My mom is a photographer, so I grew up with cameras being around pretty much all the time. In high school she gave me an old Minolta that had belonged to my grandfather, and I used it in the high school photography class that all the “bad” kids take to get easy art credits. Maybe I was a “bad” kid?

I took a lot of pictures with that camera, mostly just wasting film because I never really got the hang of all the technical jargon. I don’t remember much from the class, but now that I take pictures digitally for the most part, I can take hundreds of pictures and the worst part about it is having to go through them all.

After making the decision to put more energy into blogging and less into feeling bad that I’m not cut out to be an entrepreneur, I decided that I should experiment a little bit with taking better photos. I have quite a bit to learn about my camera, and photography in general, but I love taking photos and I know that they only way to get better is to do something. A lot. 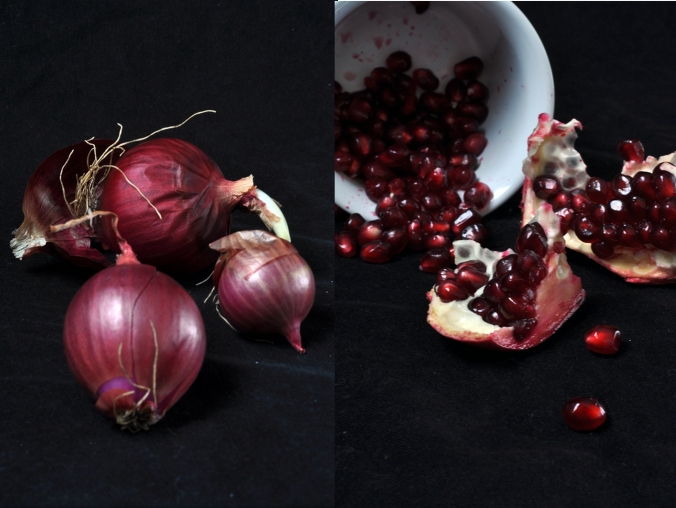 So I’ve pretty much turned the camera into an extension of myself. I see things through the viewfinder even when I’m not physically looking through it. I think I’ve improved quite a bit even since picking it back up last December, but I can’t be the best judge.

One thing I have been doing is experimenting with “fancy” food photography style photos. I’m not sure it’s really my style. I’ll have to get back to you on that.

Another thing I’m working to improve on is putting in the effort to perfect recipes before I share them. I am a very casual cook. I don’t often use recipes and when I do I usually change things right off the bat. Sometimes it’s because I’m missing an ingredient, sometimes because I look at the recipe and know that it won’t work the way it’s printed so I adjust things as I go along. The problem is, I rarely take notes. 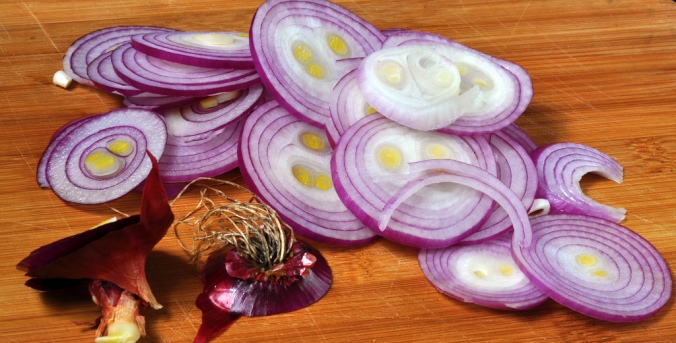 I didn’t take notes for this recipe either, but I did make it like 4 times before I decided it was ready to share here. I’m pretty confident it can’t be improved upon.

I got the inspiration for this salad from a friend of ours whose family we spent Christmas Day with. She served it for dinner that day alongside an amazing roast leg of lamb with like 1 million cloves of garlic stuffed into it. Since then I’ve made it about once a week, eating it until I get tired of it (usually with only a serving or so to go, which I then send with Joe for lunch) and then craving it again just a couple of days later. Since it was originally part of a special meal it’s got a special place in my brain, listed under the heading “impress your guests with fancy food” even though it’s just as easily eaten with your fingers straight from the bowl, all by yourself.

I never asked her for the recipe so I don’t know if she made it up or if someone else deserves the credit but I haven’t come across a recipe quite like what I have here, so I’ll just call it unique and pass the fame on to her. This salad pretty much makes a meal. I’ve been eating it with a hard boiled egg alongside, or a heated up samosa. It’s very filling and even more delicious. 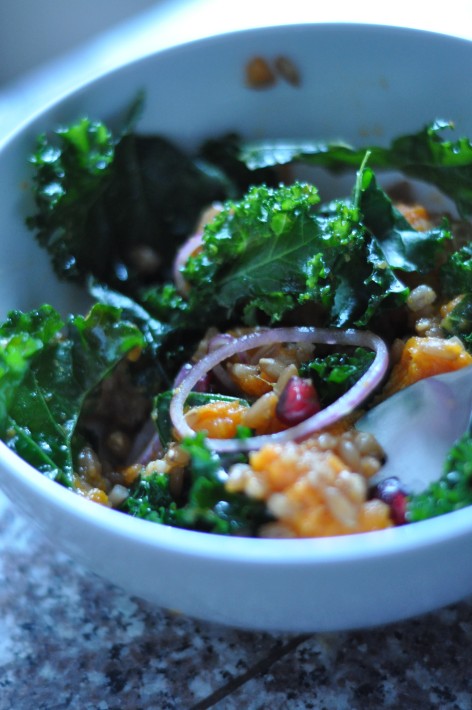 Roast the yams in a 400ºF oven for about 45 minutes, more or less depending on size, until a fork sticks in easily. Allow to cool.

While the yams are roasting, bring the water and stock to a boil. Add the farro, cover, and reduce the heat. Cook for about 50 minutes until the grains have mostly split and are soft but still have a little bit of bite. Turn off the heat and let sit until about room temp. Don’t worry if there is liquid left when you do this, the grains will absorb quite a bit more as they cool. If there’s stock leftover in the end, save it to add to soup.

Meanwhile, mix together the very basic vinaigrette. Feel free to add other things if you want, but it really doesn’t need it. Adjust to your own tastes if you like more or less vinegar. Roughly chop or tear the kale and toss it in the dressing. Allow this to sit at room temp while the farro cooks and cools. Slice up the onions and get your pomegranate seeds ready. Once the yams and farro have cooled to about room temperature you can add them in. Peel and cube the yams, and drain the farro well before adding these things to the kale. Next add the onions and pomegranates, and the raisins if using them. Give it all a good stir (I used my clean hands as it seemed to work the best. Don’t be afraid to touch your food!) and serve it up. It’s good at room temp or cold, and will keep for 4 or 5 days in the fridge.